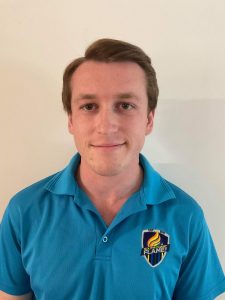 “I think I’ve really fallen into my real passion here because I don’t think there’s much I can really compare to the rewarding feeling of just helping young people get to places where they want to be.”

Lachlan Raymond is a coach in the Girls’ Youth set-up at South Coast Flame.

He took charge of the Under-15s Girls Conference League squad this season, with the side showing great development before the season was cut short.

“My first real exposure to the actual game was watching my brother play actually when I was around four years old,” he said.

“He gave it away a year later, but by then it was already too late. I was totally engrossed with the game. My first great memories came from watching the English national team and finding a team I could connect with in the English Premier League.

“I found a lot of identity in football in my young life.”

At 19, Raymond was playing at a high level locally in both the Illawarra Premier and District League competitions.

A series of injuries led to Raymond transitioning from playing the game into coaching which is where he found his true passion for the game.

“Initially I was obsessed with trying to find ways to get myself to the highest playing level I could. I was heavily motivated by competition,” he said.

“I’d already had several rather large injuries and I had few surgeries on my legs as well as my spine and it was clear to both myself and the medical professionals that I needed to find another way to keep myself involved.

“So the idea of coaching was extremely appealing to me.”

Raymond obtained his FFA Advanced C Licence in 2018 before South Coast Flame reached out to offer him a place in the Youth Girls’ program at the club in 2019.

“I thought the early stages of the club’s vision and philosophy was different to what other clubs were offering around here and I thought it was really exciting for our region,” he said.

“I almost felt I was really under-prepared but I had great support staff around me.

“I think it was the best opportunity I could have hoped for at the time.”

After completing his second season with the Flame, Raymond feels the experience has helped him to grow as both a coach but also a person.

“I pride myself on communication and a high level of detail in the projects I take on,” he said.

“In three short years, I’ve learned so much about the game.

“It’s been an absolute privilege to have been part of the project. I’ve thoroughly enjoyed working with like-minded people to achieve common goals.

“It’s been a humbling experience, that’s for sure. It’s really encouraged me to look at the big picture.”

Raymond earlier this year completed his Football Australia B Licence accreditation and believes the way Flame approaches football is the main distinction from other clubs.

“I think we’ve been really successful our first few seasons with the Girls’ program,” he said.

“I think the club’s emphasis on youth and coach development really separates us from the competition here in the Illawarra.

“With our holistic approach at the Flame, I believe we are setting the standard on the South Coast and there is no reason our goal shouldn’t be to create a pathway where girls can compete at the highest levels in NSW, with our club.”