South Coast Flame is delighted to announce the senior coaching set-up for the Women’s program for 2022. 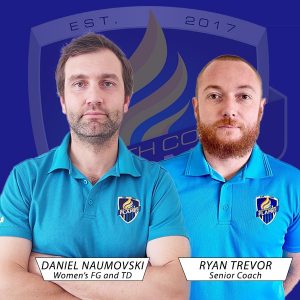 Daniel Naumovski heads into his second season as Women’s Head Coach and Technical Director of the Women’s program.

Naumovski took charge of the Flame’s first-ever senior women’s side this year in the Football South Coast local competition.

“I’ve always had a philosophy where it is always the person first, player second,” he said.

“I believe that’s the key of getting the best out of the player.”

He says there were many positives in the Senior Women’s debut season and sees a bright future for the program.

“The experience was overall positive,” he said.

“Having a brand-new set up, you get to create what you want, and we created a pathway for the existing players who wanted to stay at the club that are too old to play in the Under-17s.

The introduction of the program saw a number of new facets added to female football at the Flame including video analysis, strength and conditioning programs, and sports psychology.

“Stuff that we had intermittently for the juniors has become normal for the seniors and moving forward it’s all going to be put into the juniors’ system as well,” he said.

“The whole set up will be fluid from when they come into Under-13s up until the Women’s.

“It’s a developmental approach and it builds on each other and the phases as it goes through.”

Ryan Trevor will be a senior coach for the women’s set-up next year having recently achieved his Football Australia B Licence accreditation.

Trevor has had a very positive spell coaching in the Girls Conference League with the Flame winning several titles and was on course for another successive campaign this year.

He coached both the Under-14s and the Under-17s sides before the most recent season was cut short.

“You need to build that relationship between each other; between everybody involved,” he said.

“When that trust in each other and that responsibility and the determination all comes together… there’s not many people that can match us.”

Trevor echoed the views of Naumovski feeling the inaugural season for the Senior Women’s program was a great platform to begin from.

“I think it was good. It started slow because we were essentially starting a team from base zero,” he said.

“By the end of it, it was coming in leaps and bounds. Every single week at training it got better. Every game got better. The mentality of the players got better.

“It took time to adapt, but for those players, it was the best possible thing for them because they matured both on the field and inside their heads.

Trevor described the past two shortened seasons as leaving the players with ‘unfinished business’ heading into 2022.

He hopes to see players continue to improve and push themselves next year.

“I guess what I am excited about in this new role is the ability to work with those really motivated, intelligent, passionate players and see where it takes us.”